The phrase “pull yourself up by your bootstraps” originated shortly before the turn of the 20th century. It’s attributed to a late-1800s physics schoolbook that contained the example question “Why can not a man lift himself by pulling up on his bootstraps?”

So when it became a colloquial phrase referring to socioeconomic advancement shortly thereafter, it was meant to be sarcastic, or to suggest that it was an impossible accomplishment.

Eventually, however, the phrase’s commonly-accepted meaning evolved, and now when we tell people to “pull themselves up by their bootstraps,” it’s implying that socioeconomic advancement is something that everyone should be able to do—albeit something difficult. 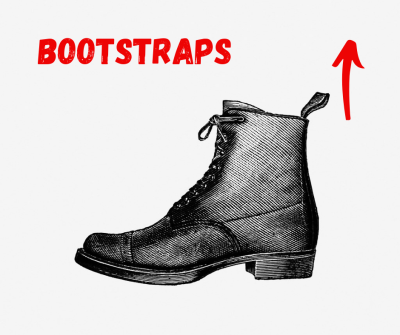 Also: Boots with bootstraps—or at least the shoe parts commonly called bootstraps, since boots with straps are much older—weren’t popularized until ~1870, so the character Bootstrap Bill in Pirates of the Caribbean, which is set in the late 1700s, is an anachronism.

This idiom is also the source of “booting” a computer, as well the mathematical Bootstrap Method.