I wanted to know the origin of the word “matador,” so I looked it up and fell down a crazy etymological rabbit hole.

First of all, “matador” means “killer,” from matar, “to kill.” While it’s most likely from the Latin mactare “to kill,” it could be from the Arabic mata “he died,” from Persian, which also appears in the Arabic phrase shah mat “the king died”—the source of “checkmate.”

BUT THEN I looked more into the word “checkmate” and found all sorts of weirdness, like the fact that every variation of the word “check” comes from the game of chess. Seriously.

But backing up a bit: The Persian word mat in the phrase shah mat was misunderstood as it moved into Arabic—it meant “be astonished” in Persian—while mata was the Persian for “to die” (although mat was the past tense “he died,” hence the confusion). So in Persian, shah mat meant “the king is left helpless, the king is stumped.” (Also I find it a bit hilarious that it basically means “the king literally can’t even.”) 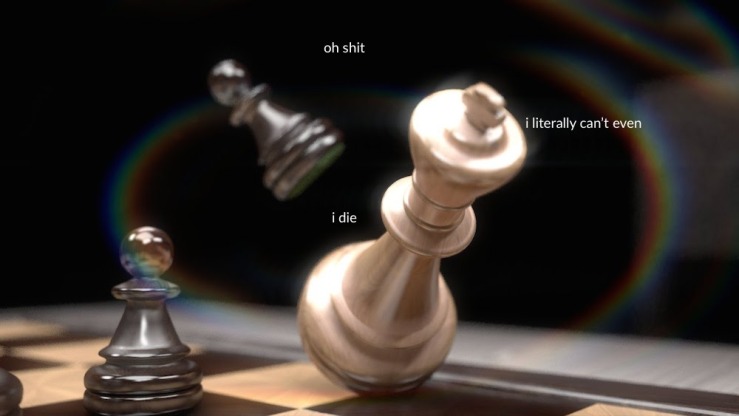 So like I said, the word “check” comes the game of chess, which is ancient as heck. The English name of the game was adopted from the Old French esches, or “chessmen,” plural of eschec, the name of the game itself, which came (by way of Latin) from the Persian shah, “king.”

(The original name of the game was the Sanskrit chaturanga, which referred to the four categories of members in an army: elephants, horses, chariots, and foot soldiers. “Shah mat” was what you said when you won, just like today.)

The word eschequier was Old French for a check in chess, which obviously was adopted in English as “exchequer,” originally a word for a chessboard. Exchequer, and the word “check” or “cheque,” as in the slip of paper, evidently came to be associated with government and finance because under Norman reign in England, accounting of revenue was calculated on a cloth divided into squares, like a chessboard. Both the sense of checking something off a list and a restaurant check also appears to have come from this process because counters were placed in squares on the cloth to note that items had been counted or verified.

How crazy is all that?